You need a laptop or other computer with a camera and mic. You could try your phone or tablet but I think management will be tough unless you’re a millennial.

Download and install Zoom. Make sure you know how to use it. Test it out beforehand, don’t be the schmuck making everyone wait for you to sort your shit, okay? You are welcome to Zoom me anytime prior to the game to make sure your show is in shape.

END_OF_DOCUMENT_TOKEN_TO_BE_REPLACED

But this pic makes me look like one, so I want to post it here. This was a few weeks ago with my son Carl. It was -7°F when we started climbing, no idea what it was when this pic was taken, but it was cold. 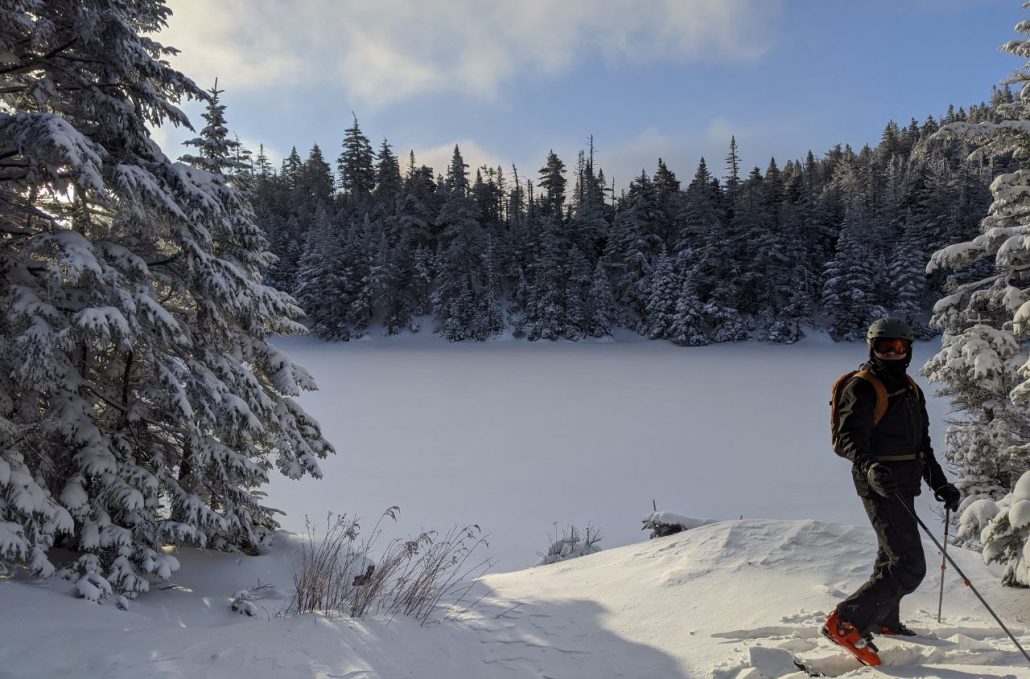 Some of you may have seen the patch on the back of my office rucksack. In case you can’t see the image here, it’s blue and has the yellow words DONT GIVE UP THE SHIP. I want you to know why I put it there, and why it makes me think of you.

You probably know that the USA fought a war to gain independence from Great Britain. We fought them again 35 years later in what we call “The War of 1812.” Many of the battles were fought at sea, between the most powerful navy in the world (the Brits) and a tiny one (the young USA).

One of those battles was just outside Boston, where a British ship was blocking access to Boston harbor. An American captain named James Lawrence decided to take his ship to fight the British and free the harbor. He and his crew sailed out and bravely attacked, but only fifteen minutes later his crew surrendered to the British ship.

END_OF_DOCUMENT_TOKEN_TO_BE_REPLACED

I think the best novel I have read this year is Viet Thanh Nguyen’s 2015 novel The Sympathizer. There are few English-language works of fiction that tell the story of the Vietnam war and its aftermath with such resonance, even into the present.

A close second is George Saunders’ Lincoln in the Bardo, the debut novel of the best short-story writer alive today. Upon reading the first page, I immediately knew I was reading a different kind of fiction, with techniques and ideas that are completely original. It took me a while to figure out what was going on, but – as in his stories – Saunders combines hilarity with such deep human emotion, and such original drama, that all you can do is re-read to look for more.

I read about Samskara, by U.R. Ananthamurthy, in this review in The Nation earlier this year. I’ve spent some time in India but never really connected with its literature beyond authors well-known in the West. So the story of this book, written in Kannada and translated by A. K. Ramanujan, written in 1965 but reissued by NYRB Classics just a year ago, surprised me with the universality of its themes. Its struggle between the sacred and profane, and between the ancient world and the modern one, seems timeless.

I heard about The Wealth of Humans, by Ryan Avent, on Azeem Azhar’s Exponential View podcast (which is illuminating in its own right, def give him a listen.) Avent, who like Azeem was a writer at The Economist, makes some insightful predictions about the future of the world economy, when machines do much of what humans must do now. The potential for enormous disruption but also great opportunity in employment and politics is scary. There is a lot of press hysteria now about how “the AI/Machines/Robots will take our jobs,” but Avent does a great job of exposing the obvious conclusions of tech progress without hyperbole or drama. He also asks the hard questions and doesn’t pretend to have easy answers. (They will take our jobs, by the way…)

In 2005 Patty and I moved with our two kids from Underhill, Vermont, USA, to Hong Kong. At that point, Hong Kong had been only eight years under Chinese rule, and was a very different place than it is now (or will become, it seems). Governments aside, it has always been very different to Underhill.

That was only the first of a series of shocks that Patty and I put the kids through, as when we moved to Beijing in 2007, when Carl left for the US Naval Academy in 2014, and when Nellie, Patty and I moved to Tokyo in 2015. Each of these relocations and the many other changes between jobs, studios, apartments, schools, languages were embraced with grit, acceptance, and enthusiasm by all the tribe. We have had an unpredictable, fascinating, lucky, and mostly fun 12 years in Asia.

But it’s time to return. With Nellie headed to college this fall, at University College Dublin (as part of the Northeastern University program she’s entering), Patty and I will have an empty nest for the first time – actually, two nests, one each in New York and Vermont. Patty will continue to paint and draw, and if the success and progress she’s had in Asia are any indication the Vermont studio and NYC “sales office” will lead to great things.

As for me, I’m going to catch my breath for a bit. The last twenty-something years have seen four companies, eight homes, four tier-one cities and a tiny town, and hundreds of acquaintances – many of whom have become close friends. I’m going to take a few months to figure out what the next step should be, and I’ll write about that process here.